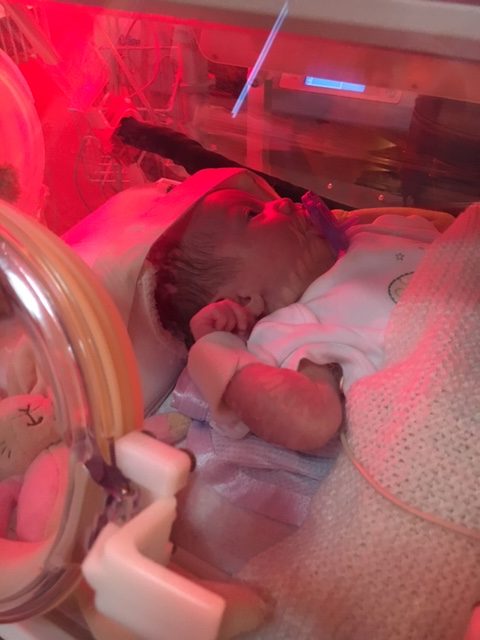 This is Betty in her transport incubator.

The following Monday we were approached mid-afternoon and told that there was a bed in Portsmouth and that we were to move in a few hours.  I had planned with mum to give Betty her first ever bath on this day, but mum wasn’t fazed. I called her and asked for a suitcase as James and I had been living in one room for a month and he had brought over a lot of clothes for me!  Mum arrived with the suitcase in her car and she came onto the unit with us.  She knew that she really probably should not bath Betty (there are rules about grandparents involvement and are encouraged to not even hold the baby they are visiting which is perfectly reasonable, but I trusted my mum more than I trusted myself so…) but again, that wasn’t going to stop her, or me.  She gathered the portable bath, filled it with warm water.  She got Betty ready and I was watching with pure intent.  I had no idea how to bath a baby!  I had only ever bathed dogs and that’s really not the same.

Mum wrapped Betty in a towel, she did it so swiftly, and it was like a QVC advert for how to wrap your baby in a towel!  She held Betty in one hand and started by gently washing her hair.  Betty loved it from the get go!  Once mum towel dried her hair, she unwrapped the little parcel of loveliness and gently lowered her into the bath, using one arm to support her little body (her weight had dropped to 5lb 2oz now that the fluid had shifted).  Betty was instantly a water baby!  Let’s all take a moment and remember that Betty was 4 weeks old on this day.  I know there is something these days about not bathing your baby straight away etc., but 4 weeks is pushing it!  One of the nurse’s found some cheese behind her left ear!  Ok, so if you’re not a nurse/healthcare worker you may be wandering what the hell I am referring to.  Body cheese is a thing!  It is a white ish creamy substance that builds up, generally between folds of skin, and it STINKS!!!  A lot of nurses quite enjoy removing said cheese, and one of the nurses asked me one day ‘do you want to remove some cheese?!’.  Of course my answer was YES!  Betty had a chest drain in her right side and so she was on her left side for a long time, her poor left ear fell victim to this and ended up (accidentally) folded down under her head gear….!  Actually, to this day, her left ear pokes out a little and the left side of her head is a little flatter than the right.  But I don’t mind this slight cosmetic obscurity, she is a bloody miracle!  A flat head and a pokey out ear are and were, the very least of any of our worries!

Anyway I digress.  So I was able to remove a really satisfying amount of cheese from behind both ears.  It was such a wonderful feeling to clean her up.  Those that know me are well aware that I like things (and people), very clean!

We had about 4 hours in total to get our lives packed up and loaded into the car, before Betty was moved.  Me and mum went over to RMH to get started as James had chosen this day to ‘give back’, which meant he was busy giving blood when we were told about our imminent move!  Me and mum made good head way and had most of the clothes, makeup, dry foods, toiletries packed up before James read the text I had sent him which basically said “WE ARE MOVING BACK TO PORTSMOUTH!”  James loaded the car but he realised the picture of Betty, the one we were given the day she was born, had fallen behind the dressing table/chest of drawers.  He took his time and painstakingly unscrewed the whole unit in order to retrieve said photo.

We had arranged that he would drive to QA and I would travel with Betty, in the ambulance.  This is something I was unable to do on the transfer from Portsmouth to Southampton and so I desperately wanted to be with her on her return journey.

All was agreed.  The transport team arrived on the unit and moved Betty into the transport incubator.  The same rule applies on the return journey.  The baby must be deemed stable for at least one hour, prior to the transfer taking place.  It was different this time.  Betty had her eyes open and she looked as though she had some idea of what was happening to her.  I longed to reach into that enclosed incubator and hold her next to me.  But that is not an option.  The ambulance team were fantastic.  They explained all the beeping noises to us and told us what everything meant.  The driver seemed like a nice old man.  Friendly and calm.  Perfect for our little road trip.  I was gutted that my seat was in the front of the ambulance and not in the back with Betty, but I understood the reason for this and I was just thrilled to be given this opportunity.  To take my baby girl back to where she had entered the world.  I sat patiently in the front seat, glancing behind me constantly, as we made our way down the M27, a very familiar drive but one I had only done once in a whole month.

When we arrived at QA, the ambulance team were full of smiles and positive chatter.  I (sort of) relaxed into their mode and plodded behind Betty in her incubator, wheeled along by the transport team.  We arrived on the NICU that we had been on 4 weeks before, in a very different situation to how we had left it.  That didn’t stop me from feeling terrified.  My stomach flipped and I felt the same uncertainty that I had all those weeks ago.

We walked passed the intensive care area and I could hear the familiar and haunting beeps and alarms of the big machines.  We headed past the intensive care and down towards the ‘special care area’.  We turned right and watched as the nurses and doctors received their handover from the transport team.  I watched as they removed Betty from the enclosed incubator and placed her in a ‘normal’ cot.  The cot you imagine your new baby coming home to is not the one that Betty went into, however, it was the same cot that all new babies go into in hospital and that was a huge milestone for us all.

Betty no longer had big, scary looking screens above her cot.  She only had an oximeter which detailed her oxygen saturation and pulse.  She still had her NG tube in situ but the lack of machinery and alarm noises was a big change and a scary, but positive step.

Once Betty was settled and we had met the nurse in charge of the special care area for the night shift, we made our way home.  I hadn’t been home since the day we left to go to QA to check the baby was ok due to my lack of movement.  Honestly, I can’t remember walking through the door.  I don’t remember seeing the bedroom although I had seen the picture that James had sent to me.  I remember a photo of the room.  James had set the next-to-me crib up and had cleaned and tidied.  It looked exactly how I had hoped it would.  But I have no memory of it in person.  My mental health nurse brain tells me that this is because it is a memory I do not want.  I did not want to be at home without my little girl.  I didn’t want her to wake up in the night and be fed by a stranger.  She knew the staff in Southampton and hadn’t seen any staff in Portsmouth since she was resuscitated, the guilt punched at me like Tyson fury.  I had not control over this whatsoever and my ‘reasonable mind’ told me to be thankful she was in a hospital with all the medical staff that had saved her life.

I had heard the staff in both hospitals use the phrase “establish feeding” but I didn’t actually absorb this.  I was now so used to being in hospital that I assumed we’d be there a while.  The next day I was visited on the unit by the breast feeding consultant.  And so the breast feeding began…this would become our route to getting Betty home.